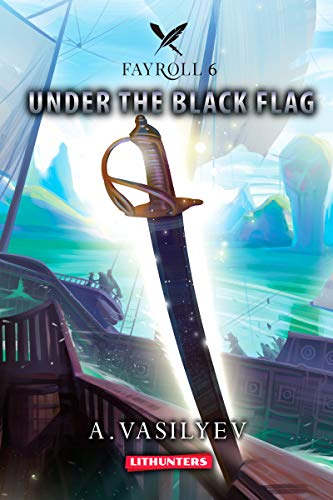 Hoist the sails! Full speed, sailors, we’re at the start of the new Digital Adventure!

Book 6 of the Epic LitRPG and Gamelit Fayroll series is a breakthrough. The author acts resolutely and ruthlessly, swirling what used to be untouchable in the previous five books — the real world. All the mystery that appears as slight hints before, now reveals themselves as a full-scale masterplan of some supernatural creatures. Everything you knew has to be rethought now, as the double bottom of the out-of-the-game world is exposed. It was, and it will be “More than a Game.”

Another quest sends Kif to a brand new location where no player’s foot has trodden before. He’s the first and only one there. As soon as he falls off the portal, he finds himself in the middle of pirates’ problems, faction’s wars, sea battles, boardings and corsairs’ intrigues in the rough waters of the Tigali Archipelago. Being unable to leave the place, or to contact other players or to reveal his location, Hagen, the warrior from the West, joins Captain Daisy Englend’s fleet to finish his quest. Under the black flag of the young but furious Captain Daisy, he has to gain a reputation among corsair’s fractions, discover new islands and items, deal with sailors and bearded captains with sharp rapiers and cunning traders, find vivid allies and deadly enemies, reveal dodgy traitors and meet the Great Kraken itself. Where will the line of Archipelago’s quests lead our hero? Batten down the hatches, a storm is coming!

You thought you knew enough about the game-world of Fayroll? Well, so does Kif, but the developers still have something up their sleeves! Just getting along with his position in the Fayroll world, logging-out, he finds himself at the center of another big game between Raidion and the Consortium, and this one is bigger than anything he has seen before. Both powerful real-life fractions need him to cooperate, and both of them are not what they seem to be at first sight. Most of the daring thoughts and guesses of Harriton are now confirmed. The real world doesn’t seem to be so simple anymore. Things, which might be usual for the Fayroll world but not for the real one, are happening and each time get more and more dangerous. The everlasting scriptural conflict comes to its point around the Fayroll game in real life. Will it come to an end and what will that mean for everyone involved? No more sneaking around and playing games, it’s all serious now. Beware, Harriton, your soul is at stake…

“Fayroll: Under the Black Flag” is the 6th book from the fantasy litRPG series by Andrey Vasilyev. Creating an epic story, he gets recognition for his talent. The first book of the Fayroll series “More Than a Game” was voted as new fantasy book of the year 2014. Later it was adapted and translated for English-speaking readers and found it’s fans all over the world!

LitRPG is a young genre, but it has already got its fans. The Fayroll series is an excellent example of a well-written and breathtaking story. Gaming fans will be pleased to find references and familiar details as quests and achievements, experience and NPC’s, but at the same time, people far away from gaming won’t be entangled in terms and game features. The book does not overdose with “in-game” as a large part of it contains real life. In total, we get a nicely proportioned mixture of the fantasy world and the real one. The whole setting is catchy, so the story gets the entire attention of any reader till the last page.

You have unlocked Masks off
Task: Read Fayroll book 6, find all hidden secrets and reveal the truth
Reward:
+100 to wisdom
Accept?