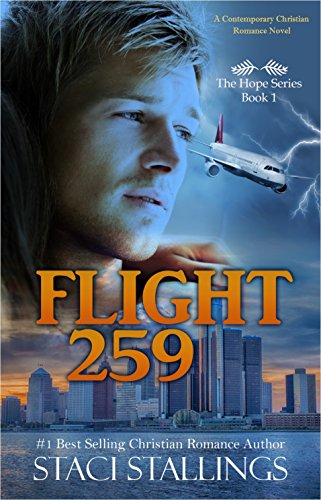 Life has not been fair to Jenna Davis. After losing everything she considered her world three years ago, her only hope has been holding on and trying to survive. When she finally decides she must find a way to go on with life, she boards a plane destined to visit a friend across the country. But she hadn’t counted on meeting a handsome stranger and his young son on the flight, nor could she have prepared herself for what life would throw at her next. Can Jenna find love again after tragedy strikes or is she destined to go from one tragedy to another forever?

Scott Browning was devastated when his marriage broke up. With his young son, Lane, he is learning to pick up the pieces and go on with life. On his way home from a visit to his parents, Scott meets a young woman who will change everything, just before his own life is thrown into question. Most couples think about love at first sight. Could this one be love at first death?

“Staci Stallings writes Christian romance at its finest!” A compelling story that will leave you asking, “Why am I here?” and “What is the point of suffering and trials?” Life, death, danger, forgiveness, mercy, grace, and most of all hope, “Flight 259” and its sequel “A Time for Love” give you a glimpse into not just this life but what is to come. Maybe, the story says, the trials of life are designed to teach us to hope in God and to hold on for second chances we never knew might come our way.

The emergency lights in the cabin flickered even though most of the violent shuddering of the wounded aircraft had subsided. Worried voices and screams of pain intermittently pierced the ominous semi-darkness. Oxygen masks dropped from the ceiling, and Jenna grabbed for hers and then helped Lane with his. When she looked over to Scott, his face was a ghastly white, and with one look, she knew it was more than fear.

“Are you okay?” she yelled through her mask as she saw him struggling to get his own on. “Here!” She reached over and helped him put the mask on. Between them, Lane began screaming when he saw Scott with the mask on his face. “No, shhh, honey. Shhh.” Jenna pulled him to her, soothing and rubbing Lane’s arm. “It’s okay. It’s going to be okay.”
However, the other cries in the plane and the convulsions of the plane itself were wreaking havoc on everyone’s nerves, and Lane was no different.

“Listen,” she said willing her voice to be calm, and then without her knowing how or why, the words and melody just came. “Amazing Grace how sweet the sound.” It was the song her father had taught her many years before, and somehow the words flowed through her now with no effort at all. Her voice sounded much stronger and far calmer than she felt, but she knew that somehow she had to get Lane to calm down. She had no other choice.

The chaos around them mounted as the plane nose-dived forward, righted itself, and then pitched forward again. Each pitch was like being thrown headlong off a cliff. Without questioning it, Jenna reached across Lane and held him against the seat. As the plane dipped again, she had the vague thought that this was her worst nightmare come true, but she pushed even that observation away. She had to remain focused if she wanted to make it out of this alive…