Price history for
Death in Londinium 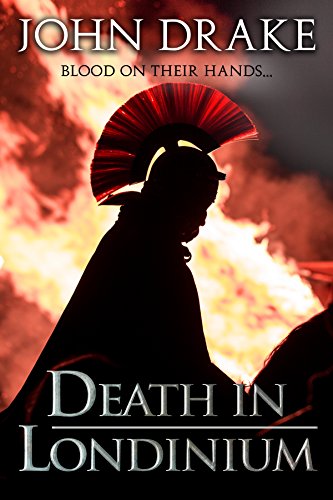 Fabius Gentilius Scorteus is a Britannic Celt, the richest man in Londinium.

But he desperately wants to become a Roman citizen.

He calls upon his Greek slave Ikaros of Apollonius. Ikaros was once a soldier, nobleman and engineer, but, after his country was invaded by the Romans, he was forced into a life of servitude. Known for his mind-reading abilities, Ikaros is believed by some to have magical powers.

Londinium is in need of a method to raise the water for the Imperial Baths. So Scorteus calls upon Ikaros’ talents to design such a structure.

If this project is accepted, Scorteus will finance the project for Londinium in the hope of winning citizenship.

And once he becomes a Roman citizen, Scorteus promises to make Ikaros a free man.

But, things do not go as planned…

A member of the Scorteus household is discovered murdered. Everyone believes that it must be the work of a servant.

Under a vicious Roman law Senatus Consultum Silanianum, if any slave killed the master, then every slave in the house was put to death, meaning hundreds of innocent people.

Ikaros is sure no-one in the household is to blame. With his mind-reading powers, it is suggested that he may be able to solve the murder.

With the support of Morganus, First Javelin of the Twentieth Legion and his men, Ikaros sets out to solve the mystery.

And when further blood is shed their investigations take them to other parts of Roman Britain in an attempt to find the truth ...

Will Ikaros unmask the culprit before innocent blood is shed?

Death in Londinium is a gripping historical mystery set in Roman Britain.

"Swashbuckling adventure on the high seas doesn't get much better than this. […] John Drake writes beautifully, and you'll be torn between savoring the words and quickly flipping the pages. Any favorable comparison to Stevenson or Patrick O'Brian is totally justified." – Nelson DeMille, #1 New York Times bestselling author

John Drake trained as a biochemist to post-doctorate research level before realizing he was no good at science. His working career was in the television department of ICI until 1999 when he became a full-time writer. John's hobby is muzzle-loading shooting, and his interests are British history and British politics (as a spectator), plus newspapers, TV news, and current affairs. He is married with a son and two grandchildren.
Category Hierarchy