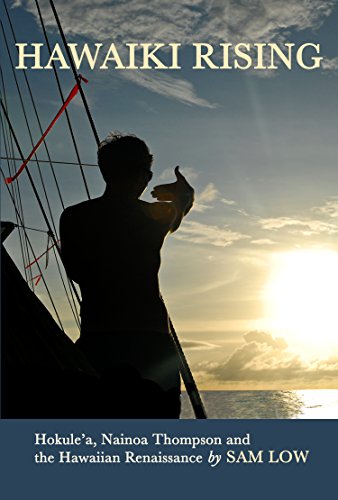 As the walls of Troy were falling to the Greeks, Polynesian explorers followed star paths across the world’s greatest ocean to settle one third of Earths’ surface.

It’s one of the most amazing stories of navigation and maritime exploration.
And it’s never been properly told. Until now….

Ask today about the settlement of Polynesia and you will be told a false tale of drifters at the mercy of wind and wave – Kon Tiki. Thor Heyerdahl believed Polynesians floated into the Pacific from South America on crude rafts, pushed by prevailing winds and currents.

But the real story is far more interesting – they sailed against these winds and currents from island Southeast Asia in sophisticated sailing craft. In vessels like Hokule’a – a replica of a double-hull Polynesian voyaging canoe. In the last 40 years, Hokule’a has sailed 140,000 miles - from Hawaii to Tahiti, New Zealand, Samoa, Easter Island - following ancient voyaging routes. Her crew has discovered the secrets of early navigators that allowed them to find land across thousands of miles of trackless ocean.

And by sailing the sea paths of their ancestors, Hawaiians have rediscovered pride in their voyaging heritage – and sparked a renaissance of their culture.

Hawaiki Rising tells this story in the words of the men and women who voyaged aboard Hokule’a. They speak of growing up at a time when their Hawaiian culture was in danger of extinction and their future in their own land was uncertain.

We join Nainoa Thompson, a young Hawaiian, as he looks skyward to discover ancient star patterns that once guided his ancestors on their epic voyages.

We meet Mau Piailug, a traditional navigator from the tiny Micronesian island of Satawal, as he reaches across barriers of culture and distance to give Nainoa his secret wayfinding knowledge.

And we are aboard Hokule’a as Nainoa and his crew make a 2400-mile ocean voyage from Hawaii to Tahiti – the first Hawaiian sailors to navigate the Pacific without charts or instruments in a thousand years.

When crewmember Sam Ka’ai carved the ki’i – the sculpted figure - that adorns Hokule’a, a dream came to him of a blind man reaching to the heavens. “This is an effigy of how we are after so many years of oppression,” Sam tells us. “Blind to our past, we reach up to grasp heaven one more time. He is reaching above himself, beyond himself, to the story that has not changed, the forever and ever story. He is showing that we are taking hold of the old story once again.”

Hawaiki Rising is the saga of an astonishing revival of indigenous culture by voyagers who sailed deep into their ancestral past.

Hawaiki Rising - has won the 2014 Samuel M. Kamakau award for best book published in Hawaii, two Ka Palapala Poʻokela Awards, a Nautilus Silver Award, a Ben Franklin award, an IPPY award and is a finalist for Foreward Review's Indiefab award in two categories (History and Regional Nonfiction) and the Next Generation Indie Book award in regional nonfiction.
Also the winner of 61 five star reviews (out of a possible five) by Amazon readers.
“…anyone who wants to be moved, inspired and kept on the edge of their seat living a great adventure - this is the book. With grace and skill, one of the truly great human adventures has been preserved forever.” Mindi Reed
“The pacing is great. A good read. Fast, interesting... I adore the portraits of the various players, including minor ones.” Author Christina Thompson.
“...inspires us to hope for intelligent and peaceful resolutions to challenges that face each of us individually and all of us collectively. It's a book that resonates far beyond Hawaii and the Pacific.” Lorna Strand, Aiea, Hawaii
“…a story of finding one's self, one's conviction, one's cultural destiny.” Mike and Diana M. Shaw
“It was the most moving book I have read. When it ended I wept. Bless you for writing it with such understanding and bless those who continue to voyage.”  Dixie Brown