Price history for
The Victory of Christ (Christological Trilogy Book 3) 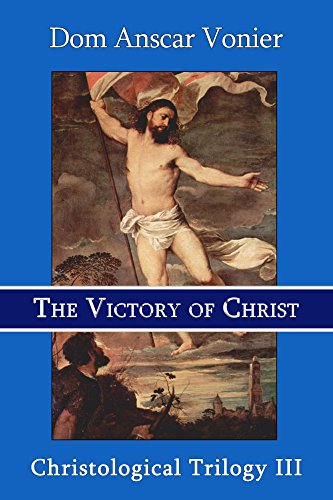 Abbot Vonier was one of England's most popular theologians and homilists in the early twentieth Century. In "The Victory of Christ," Vonier examines the joyful meaning of Christ's triumph over death and its centrality to the life of the Church. Beginning with an in-depth study in the New Testament texts relating to Christ's conquest of death, Vonier explores how the reality of Christ as Victor informs the Church's aposotolic mission, its liturgy and sacraments, and gives to all Christian spirits the means of understanding and confronting the presence of evil in the world.

Vonier writes, "The Catholic Church then, must at all times be viewed in the light of Christ’s victory; it is her very life to believe in that victory, to feed on it, to glorify it through the Spirit that is in her. Any diminution of her faith in Christ’s victory would be a death-blow to her; for she is not living on an edifying memory, but she ﬁghts for the King of Glory whom the heavens have received."

"The Victory of Christ" is the third of three great Christological texts by Abbot Vonier. It is preceded by "The Personality of Christ" and "Christ the King of Glory."

Praise for "The Victory of Christ":

“The Victory of Christ” is a literary mosaic portraying the meaning of the eternal triumph of the Redeemer as seen from various points of view and as it should be imprinted as a reality on the mind of the faithful.”
-Dom Bernard Moss, in “The Downside Review”

"The gripping reality of Christ’s victory cannot be set forth in few words, nor can it be understood by the unbeliever. But the sincere Christian who reads this book once, and perhaps again, will be rewarded and comforted by a clear realization of the truth which the Christian ages celebrate as the Victory of Christ."
-Orate Fratres
Category Hierarchy